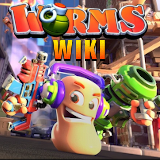 The Worms Wiki is a wiki dedicated to the Worms series, which are video games starring worms. These games are mostly developed by Team17, while there are some exceptions. Worms is a turn-based strategy game, where the player should take down…