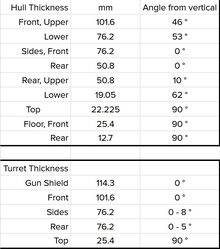 This model was a converted T26E1, that was later up-armoured with extra plates to the gun mantle and the front hull. It received two 38mm boiler plates on the front hull, and the turret received an 80mm armour plate from the upper glacis of a captured German Panther. This vehicle also had a 90mm Gun, T15E1 instead of the T15E2 in other T26E4 models.

It successfully destroyed two vehicles - a Jagdpanther (s.Pz.Abt.507) and an unknown tank, thought to be a Tiger I, but it was likely a Pz.Kpfw. IV due to lack of evidence of Tigers remaining in the area.

This particular model was sent to Kassau after the war and scrapped.

Community content is available under CC-BY-SA unless otherwise noted.
Advertisement